i Mar 4th w No Comments x by Marion Fairweather 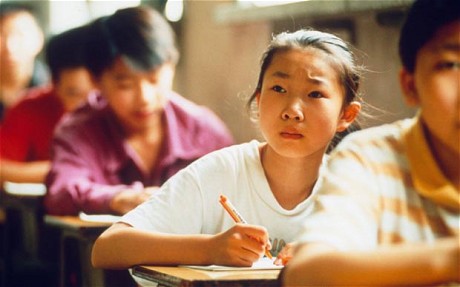 The Gathered Together team met Etta Leslie, an “English as an Additional Language” teacher at Oakgrove Primary school in Glasgow at a networking meeting. Etta has long been an advocate of supporting parents to get involved in their children’s learning and regularly runs workshops for parents- showing them how their children are taught and activities they can do at home to support their children’s learning. Oakgrove Primary has seen increasing numbers of children from Chinese families in recent years and Etta was concerned that she was struggling to engage with the Chinese parents. We had recently met Jessie, a teacher at the Chinese language school in Glasgow, and were able to put Etta and Jessie in touch with each other.

Chinese and English are very different languages, the sounds and speech patterns are completely different as is the written form. One Chinese parent spoke to us about the experience of coming to Scotland and suddenly becoming illiterate, unable to read even the most basic signs. To be able to access the curriculum children need to learn English, Etta had observed that many of the Chinese children she supported with were struggling and not achieving their potential in class and felt this was related to difficulties in learning English and because their parents felt unable to support them with their learning at home. Etta explains,

“I had a good resource of Arabic parents who I could rely on for translation support as I have some parents who are actively involved in school life. When I looked around it became clear that I did not have the same resource available in Oakgrove’s Mandarin/ Cantonese speakers. I then began to wonder if this was a contributing factor in the slower progress of some of the Chinese children. It noticeable that lack of access and confidence in English is a significant barrier to learning for this group. It also inhibits parents from being able to engage, support and understand the Scottish Education System and thereby support their children’s learning. As educators we value and promote opportunities to work alongside parents to ensure their child’s educational success.”

The Chinese parents also did not often attend the school assemblies and events and this meant they were missing out on important information about what was happening in the school and the chance to see their children perform their work. Children, at primary school if not when they are older, love to have their parents in the audience and we often see children standing on tip toe during concerts scanning the audience for their parents’ faces. Attending school events gives children confidence, helps them feel proud of what they are doing and shows them that their parent values school. Jessie said that she agreed to help Oakgrove because,

“I feel that is my responsibility to become a bridge between hard working teachers and hopeful parents and to give them a chance to express them selves, would give their  children better chances in their future.”

Etta and Jessie met to discuss the best way of engaging with the Chinese parents, as Jessie is a teacher at the Chinese school, she has had a lot of contact with parents from the Chinese community and was able to develop a personalised letter for each of the parents. Translated letters often translate exactly what was said in English, but Jessie was able to put the letter into appropriate language. In English we often use “soft” words like “we would like to invite you”, Jessie explained that in Chinese it was better to be more direct to show parents that they needed to attend this event. The letters were all addressed to individual parents and Etta was able to give the letters personally to each parent, avoiding the risk of them lying in a school bag for weeks and emphasising that each individual was welcomed.

At the workshop every single parent invited attended, something Etta puts down to the personalised approach. Having Jessie as an interpreter was invaluable, helping the parents feel relaxed and ask questions. Jessie was also able to help with workshops on play run by the primary one teachers- showing the parents the value of playing with their child and giving them ideas of activities they could do with their child, like jigsaws and counting games. Jessie found the experience really positive as well

“I enjoyed very much work with Etta and other teachers, I can feel the love and hope they have been given to their students, much appreciated. I only did a wee thing, but made me happy and I enjoyed it.”

Etta is currently off work, awaiting a knee operation, but has been thinking about other ways of engaging with the Chinese parents

“I am very aware that Jessie is a volunteer and do not wish to abuse her generosity. It has though , highlighted the great need here in Oakgrove and in many establishments of the benefits of home language support for both parents and children. I have since discussed with Marion (from Gathered Together) the idea of making contact with Glasgow University who have a significant Chinese student population, with the idea that some students may like to take the opportunity support learning in schools through working with parents and children.”

Having bilingual volunteers can make a huge difference to teachers wanting to engage with newly arrived families, at Gathered Together we are encouraging schools to look for opportunities to support partnership working, linking schools up with the supplementary language schools, foreign students looking for work experience and local community groups.