i May 19th w No Comments x by Marion Fairweather

This is a guest blog from Robert McGill (Teacher of English as an Additional Language South Ayrshire Council) sharing the work South Ayrshire has done to engage with parents who are new to Scotland. 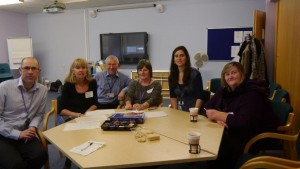 On Friday 28th November, 2014 we had one of the best experiences of our teaching careers when we held the first English as an Additional Language (EAL) Parent Forum in South Ayrshire.  Approximately 55 parents made the extra effort to come to the John Pollock Centre in Ayr to tell us about their and their children’s experiences in our schools.  It was an excellent forum to get to know each other a little bit better.

Everyone was excited about this event particularly when we saw the invitation letter acceptances coming back in such big numbers. 12 languages were represented on the day:  Spanish, Tagalog, Punjabi, Visayan, Swahili, Yoruba, Greek, Turkish, Russian, Nepali, Polish and English.  We had sent the invitations out to parents in the home languages as well as in English and the parents made special mention of this telling us that they really appreciated our efforts to use their home languages.  Of the 12 languages represented there was a request for four interpreters:  Punjabi, Spanish, Nepali and Polish which we were able to provide.   These interpreters played such an important role in helping everyone to communicate and share with each other.

As this was our first ever parent forum we were to have we looked at what the issues and concerns of parents are from carrying out a search of the internet.  We found the ‘Bilingual Matters’ website to be a wealth of information as they have worked extensively with bilingual parents and have kindly shared their findings and experiences.  We also found the British Council EAL Nexus website very useful and we adapted information gained from these websites to provide information to help parents understand the Scottish education system and supporting bilingualism.

As we delivered our talk, which highlighted the importance of developing the home language at home and that parents didn’t need to speak English at home, you could see relief appearing on the parents’ faces.  More important than focusing on English is the quality of communication within the family.  We talked about the challenges of families with bilingual siblings with sometimes the older sibling wanting to speak English and how this affected the younger brothers’ and sisters’ use and development of the home language.  Our core message was that bilingualism was positive and advantageous for all young people.

What did the parents tell us?

The core message from the parents was that having specialist language teachers helped their children to learn English and to settle into school life.   The parents also told us that they liked and valued the bilingual books which we send home to help parents and children develop the home language and which we have in schools as a way to value and an opportunity to use home languages.   The parents told us that interpretation in the schools is fundamental to help them communicate with class teachers and schools.   Bilingual parents would like more EAL support available in schools, they would like more support for developing English at home and they wanted easier access to the EAL teacher.

What have we done since the EAL Parent Forum?

We now have EAL information leaflets translated into some of our home languages which have the contact details for each EAL teacher.  We were able to receive funding from South Ayrshire to have key school documents translated into Polish.  We have created management advice for translated documents.  We have increased our bilingual books library.  We are going to continue to have an annual EAL Parents Forum.  It was a great day which the parents and EAL staff enjoyed and in which we both learned so much.

Here are some of the information leaflets created for EAL parents

i Jan 21st w No Comments x by Marion Fairweather

The most important reason to promote parental involvement in their children’s education is because it helps children to thrive. We have been speaking to parents, teachers and other professionals who all recognise the huge impact that having parents working with the school as part of the school community makes to the children. As one teacher said “confident individuals, guaranteed!”

However we haven’t done much work listening to the children’s point of view. As part of the film we made with the wonderful students from City of Glasgow College’s television department we wanted to speak to children and hear their voices too. We were lucky enough to be able to speak to two groups of children from Golfhill Primary and St Albert’s Primary. I think we found some future film stars and got some lovely footage of the children’s faces lighting up when they talked about how their parents got involved.

In Golfhill children from the Learning Together club (run by the EAL teacher Marilyn Gordon- see http://gatheredtogether.bemis.org.uk/?p=663) spoke about how they felt about their parents coming in to school. One young boy, whose older brother attends the group told us about a time when they acted out a play with puppets and then he and his brother read a story together “and the class stopped but I wanted to go on reading forever”. My favourite moment was when a girl was asked how she felt when her mum came into school said “I feel GENIUS!” (a word she had just learned in learning club).

The children we interviewed at St Albert’s were a mix of children whose parents were in the Parent Council, came to St Albert’s learning club or were involved in the bilingual story telling (to see some of the mothers from the story telling group go to http://gatheredtogether.bemis.org.uk/?p=854). The children spoke about feeling proud that their parents and that it showed them their parents cared and took an interest in them. 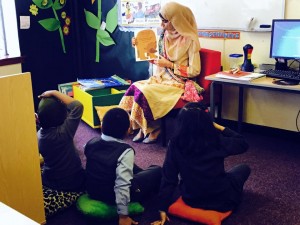 It was great to be able to capture the positive stories and experience of children but we know that this isn’t the case for every child. After speaking to parents with the Rainbow Muslim Women’s group, who had some difficult experiences getting involved in their children’s education (go to  http://gatheredtogether.bemis.org.uk/?p=878 to see Samina and Tasneem talking about their experiences). They suggested that we could also speak to children from within the Rainbow women’s group and we met with Niem and Nailah to hear their story.

Nailah said that she felt quite uncomfortable about her mother coming into school because English wasn’t her first language and she was worried what the teachers would think. She also talked about not wanting her parents to be involved and throwing letters from school in the bin. It can be really difficult for families who are new to Scotland (and parents who are new to English) to become involved in the school community and the dynamics between children and their parents can change because of the language barrier. Niem, Nailah’s younger brother, spoke about the difference that it made when his parents became involved after he was being bullied at school. He felt that the teachers listened to his parents more and also that when they do get involved it showed that they cared about him and how he was getting on at school. We made a podcast of their conversation- to hear Nailah and Niem just go to  http://gatheredtogether.bemis.org.uk/?p=878

School and Family Together

i Jan 8th w No Comments x by Marion Fairweather

We are working with a lot of organisations, sharing our experiences and looking for ways we can work together to support Ethnic Minority families become part of their school communities. Martha from SOFT has kindly written us a guest blog about the work that they are doing to help immigrant families

The SOFT project aims to foster the linguistic and social integration of migrant children through shared language learning activities that involve teachers, families and children.

The Language activities are based on the Narrative Format approach of language learning, also known as the “Hocus & Lotus” method used previously in several EU projects. Children learn languages through telling stories, whilst acting them out, singing or drawing. The most important aim of this project is to raise awareness of the advantages of early language learning in benefiting cognitive and literacy development, and it is also a fun activity to do in the class with friends and feel valued. This fosters positive attitudes towards intercultural communication and multilingualism, facilitates the use of cooperative and collaborative learning practices in class and enhances home-school relationships.