i Feb 5th w No Comments x by Marion Fairweather

It is difficult for children coming into a class where they don’t know anyone, it is even harder when that child has little or no English. While lots of children adapt brilliantly to the new culture, the first while can be challenging when they are not able to communicate and join in with the rest of their class. Marion Stempczyk and Kayee Chui from Falkirk’s Bilingual and Traveller Pupil Support Service (BaTPSS) explained to us the importance of being able to meet with the children and their family before they started school- to give them the opportunity to assess the children’s English level, explain how things work in the Scottish education system and so that the BaTPSS team can help the school get ready for the new students.

We have heard some wonderful stories about teachers who taught the class how to say “hello” in Chinese, so that the new student would be welcomed in his own language and straight away get a feeling of belonging. However, as Marion explained, a lot of teachers are unsure how best to work with students who arrive from a different culture, with limited English and different experiences of school. How can teachers make sure that a child feels included in the class when they don’t have the language skills to join in?

This is where the BaTPSS team come in, as well as helping the children develop their English, Marion and Kayee work with the teachers to help them understand what it is like for the children and how they can support them in the classroom. English as an Additional Language services are only able to support children for a limited period of time and it’s essential that the classroom teachers have the skills to be able to support children who have English as an additional language in their learning.

Here is Marion talking about the work they do with teachers

i Dec 22nd w No Comments x by Marion Fairweather

One of the brilliant things that’s come out of Gathered Together’s work has been the opportunity to build relations with groups. In Falkirk we ran training for community champions (http://gatheredtogether.bemis.org.uk/?p=330) which Megan Farr from Falkirk Council was also able to attend. This helps to build links between the council and one of the groups our community champion Sofia was running. From that meeting they are now working together to start going out to school to visit primary school classes to speak about Islam.

We have also been able to help some of the community groups we are working with to get the support to develop as organisations as well as apply for the Multi-Cultural Homecoming fund http://bemis.org.uk/project/multicultural-homecoming-2014/. It is great to be able to help groups like the International Women’s group and Rainbow Muslim Women’s group to do more and build relations.

In our videos we’ve also been able to showcase and celebrate good practice- there are so many schools and Parent Councils who do a wonderful job and have developed a real ethos of working with families. We’ve tried to make sure we promote good practice as widely as possible so that they get the recognition they deserve.

And finally through our steering group we’ve been able to open up opportunities to work with Skills Development Scotland to promote their website for parents http://www.myworldofwork.co.uk/section/parents-and-carers to parents from ethnic minorities, help communication between local authorities on how to engage parents and start conversations on how the diverse members of the group can work together.

We’ve got lots of partnership work planned for the new year, including with Education Scotland and Bilingualism Matters- these are exciting times!

i Nov 27th w No Comments x by Maryam Karim

i Sep 16th w No Comments x by Richa

We ran our second Community Champion training session in Falkirk at the end of August.  This session was marked by having participants from a couple of different local authority areas (Stirling and Falkirk) who brought their interesting experiences with them, as well as their different perspectives on being an ethnic and cultural minority parent in Scotland.

In addition to this, we were lucky enough to have Megan Farr from Falkirk education department attending too to hear the experiences of delegates.  Gathered Together promotes that the results of its sessions are passed on to Local Authorities, but in this case, it was self-evident.  The experience appeared to be useful for both the delegates and for the council, so this was great for all of those attending.

We are really excited to continue to work with our Community Champions – hopefully you’ll be hearing from them on our blog as they share their experiences as parents. 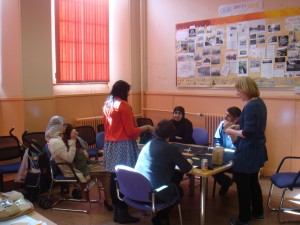 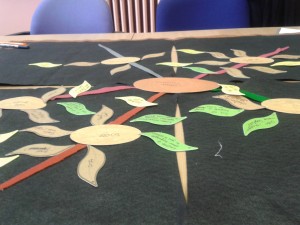 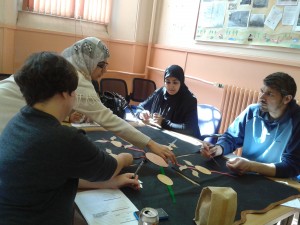