i Apr 24th w No Comments x by Marion Fairweather 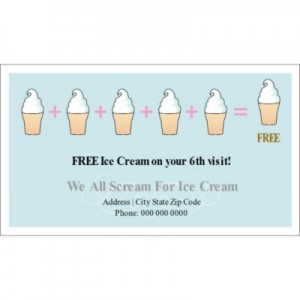 There is something really satisfying about collecting stamps and getting something free in the end- reward cards keep me coming back to the same coffee shop. But how do they fit in with parental involvement?

At a recent meeting we heard about Govanhill Nursery, in the Southside of Glasgow, who have introduced their own rewards card. Parents will get a “stamp” on their card for each school event they attend, and if they have six stamps their child can go on the school trip for free. It was born out of the difficulties the nursery had to get parents to come along to school events and give them important information about their children’s learning, applying for a place in school etc. Govanhill nursery is in a diverse neighbourhood with many parents new to Scotland and unfamiliar with the education system- getting the right information to them is incredibly important but parents can be reluctant to come to school events due to lack of confidence, language barriers and other commitments.

The nursery used the rewards cards as a “hook”- a practical reward for parents making the time to come to school events. But the parents also found the events really positive as well- giving them the chance to see what their children are doing in nursery, how they can help and all the essential information about starting school in Scotland.

All they needed was a bit of card and a chance to collect the stamps.

The school is my family

i Apr 20th w No Comments x by Marion Fairweather

For most families moving to the UK, the first communities they come into contact with are their children’s schools. But becoming a part of the school community can be a challenge.

The Gathered Together project (run by BEMIS, a body supporting the development of Scotland’s ethnic minorities voluntary sector, and the Scottish Parent Teacher Council) works with parents from ethnic minorities to get them more involved with their schools and with their children’s learning.

Says Lorraine Dougan, head teacher at Golfhill primary in Glasgow, where over a third of the pupils don’t have English as a first language.: “Parents who speak little English are often less confident about coming into the school, which means that they tend not to come to parents’ nights, school events . . . and this means they are missing out on really important aspects of their child’s learning and being part of that wider school community.”

In Gathered Together’s conversations with parents, language, confidence and lack of information come up time and time again as barriers stopping them taking a more active role in their children’s school.

When you’re not confident in you language even the simplest contact with school can be stressful. We met one mum who spoke about how difficult it was for her to phone the school to say her child was sick.

The Scottish education system is also different from other cultures. Many countries have regular tests so that parents know where their child stands in relation to their classmates, and some parents find it disconcerting that this is not the practice in Scotland.

Gordon says that when parents came to school and worked with her, “the confidence levels of the children just were obviously going up and up and up. The expression on their faces when they knew that their parent had come into school to work with them – they were absolutely delighted.

“It shows that the parents and teacher are working together and the children could see that the parents were part of the school life, that it was a place for families and not just for children.”

Getting parents involved in their children’s school has a massive impact on the whole family. One parent talked to us about the challenges posed by her children growing up in a culture different from her own and how getting involved in the school helped bridge that gap and gave her an understanding of the world her sons were living in.

Another mother at Wynford Nursery in Maryhill said that getting involved in a parents group run by the nursery helped her feel less isolated by giving her the chance to make friends with other parents, find out about local clubs and services – it gave her a sense of belonging.

Maria, a parent at Golfhill Primary, is originally from Bulgaria and is now firmly part of the school community, and is involved in the Families in Partnership Programme and the Parent Council. She’s incredibly positive about the importance of getting involved: “To be involved in the school here makes a big difference for my daughter because she sees me in school, she sees that I’m taking part in the Parent Council and she’s really proud.

“She says, ‘Oh, this is my mum, she’s doing this and that in school’. I know the teachers very well and I can have a chat with them anytime- so it’s like a small family- the school is my family”

Taken from an article on Gathered Together from Migrant Voice http://www.migrantvoice.org/voices/pagenews/the-gathered-together-project.html