Personal Reflections from the Gathered Together team- Richard

i Mar 21st w No Comments x by Marion Fairweather

As the Gathered Together Project comes to the end of its funding I thought it would be a good time to ask the staff team to reflect on some of the aspects of their work over the last 2-3 years.  We start with Richard and his thoughts on the development of the training toolkit. 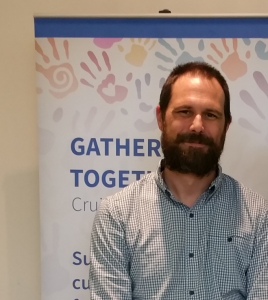 What a long way this project has come!  I started 2 years ago with solid foundations having been laid.  In the initial months, we carried on, but then used the summer break to start to move the project forward and to re purpose some elements of this.  The abiding thing that came out of this was the modular training course.  I’ve always liked modular training design: that you have a toolbox, rather than a prescriptive approach suits me far better.  In addition, the modularity of this course has enabled it to be adapted to a wide range of audiences and it has made it easy to refine, improve and to incorporate feedback.

As a central element of the course, we have a number of scenarios.  These are based on real experiences, but have been adapted to illustrate particular areas.  As this course has been repeated, the characters in the scenarios have moved from their original, real-life origins and have been given a different life entirely by delegates.  Each of the sessions has bought a new set of perspectives to both the characters and the issues that they present.  As the sessions came to an end, I realised that I am going to miss some of these characters and, in particular, miss their ongoing development.  Even those characters who are troublesome and who were included because they caused problems have had their redeeming qualities explored by delegates and some of these characters, written to unpleasant and difficult, have been reflected back in a far kinder light.

The journey of these characters has, in many ways, mirrored the journey that the project has taken.  As time has gone on, the project has grown, developed many new elements and aspects; as well as these new situations enabling us, as a staff team, to look at issues differently and to move things forward because of this.

2 years ago, I had started to think of some of the characters who might be needed in the scenarios after my first training session in Kirkcaldy, as well as started to think about how the project could develop and grow.  At the end of this period, I reflect on both in the same way: it has been a fascinating journey, made possible by some brilliant parents and schools from which I have learnt a lot and enjoyed more.  With this, however, there is a sadness at leaving something not yet finished: that the project still had work left to do and the characters were still growing and still had plenty more to teach us.