i Feb 27th w No Comments x by Marion Fairweather

I met up with Mary Pat MacConnell, the Head of Wyndford Nursery in Glasgow and Rose Filippi from Maryhill Integration Network to find out more about the project that had been run at the nursery. Gathered Together are always looking for examples of good practice and we had heard that Wyndford nursery was a shining example of involving parents. 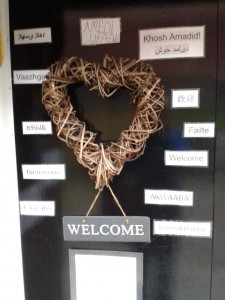 Wyndford Nursery is in the North of Glasgow in a housing estate, it is one of the areas in Glasgow with a high population of asylum seekers and refugees and there are a lot of languages spoken by the families who use the nursery. Many of the families are very socially isolated when they arrive, not knowing anyone or where to go to ask for help. Mary Pat described the “Well Chosen Words” project as being born out of “desperation”. One mother was really anxious about asking to take her child out of nursery early to allow him to go to a doctor’s appointment- she didn’t know how to ask this and the nursery was able to help her with literally finding the right words. This incident highlighted a need among the parents who had English as another language.

Wyndford Nursery partnered up with Maryhill Integration Network (MIN) to help develop the Well Chosen Words project.  MIN is a charitable organisation that has been working to support social integration in the local community for over ten years. Working in partnership with MIN has supported the project via the staff skills and knowledge of engaging with communities from various backgrounds in a sensitive and informed way, harnessing the unique and valuable cultural richness they offer, and finding ways in which to share this with the wider community

Well Chosen Words is a project that engages parents with EAL needs in planning a framework for dialogue that will support their communication needs with regards to their child’s attendance at nursery, further engagement within the community, and ongoing development in education and learning. The project aims to engage parents to play a creative role in the development of support services and material available for parents with EAL needs.

The impact it’s made on the parents has been tremendous, helping them build confidence and support each other. The support in helping to get to know the local area and services has been really valuable, here are two parents- Mathieu and Naomi- talking about how the project has helped them and their families

Cuts to a service that supports new Scots

i Feb 11th w No Comments x by Marion Fairweather

Recently I attended a roundtable discussion at the Scottish Parliament on “Getting it right for the immigrant child” hosted by the Scottish Child Law Centre. There were some wonderful speakers including Amal Azzudin one of the “Glasgow Girls”. Amal and her family came to Glasgow from Somalia and she and her friends lead a campaign against the deportation against the deportation of refused asylum seekers. The Glasgow Girls were central in ending the detention of children in Scotland (previously whole families would be held in detention centres before being sent back to their home) and ending the dawn raids on asylum seekers. For more about the Glasgow Girls go to https://vimeo.com/47646327

Amal spoke passionately about the difference that her bilingual support (now called English as an Additional Language) teacher -Mr Girvan. It was Mr Girvan who supported the newly arrived asylum seeker children, helping them to develop their English and adjust to their new homes. Across Scotland we have met some fantastic EAL teachers- they are often the first point of contact with school for families who are new to Scotland and work with the whole family to support the child’s learning and adjusting to the Scottish education system. EAL teachers are also really important in providing training and support for teachers with children who are learning English- helping teachers to understand the child’s experience, set appropriate work and be sensitive about areas that children may struggle with. For example children learning English may struggle with maths problems that have a lot of writing- they are capable of doing the maths problem but find it difficult to understand what is being asked of them through all the words.

Sadly EAL services are being affected by the cuts that all local authorities are making in funding- in some areas staff are leaving and not being replaced and recently in Glasgow 15 EAL teachers were made redundant. This is at a time when the numbers of children needing EAL support are increasing and the cuts will have a direct impact on them. Glasgow has one of the largest EAL departments with over 50 teachers, with several schools having a dedicated EAL teacher. This has enabled the EAL teachers to look beyond supporting the child to how they can help the family to support their child in their learning. There are learning clubs, helping parents understand how their children are being taught and giving them ideas of games and activities they can do with their children to help support their education. Loosing 15 teachers will impact on the EAL services ability to continue with these activities and the wonderful work that schools have been doing to get families new to Scotland to become involved in the school and their children’s education.

Amal said that Mr Girvan was her hero and helped her to settle into life in Scotland. We know that there are heroes working in EAL across Scotland and are concerned that these services are being reduced and the impact that it will have on new families who don’t have access to the support that welcomed Amal when she arrived in Glasgow.

Association of Head teachers and Deputes in Scotland

i Dec 16th w No Comments x by Marion Fairweather

An article about Gathered Together has just been published in the AHDS magazine- for those of you who don’t subscribe you can see the full article by clicking here: AHDS Parental Participation

Getting parents in over the door 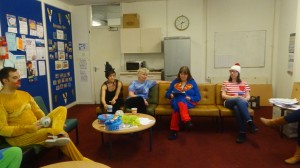 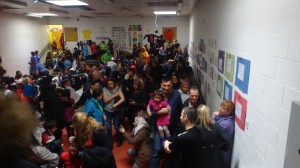 A couple of months ago we were invited to attend Oakgrove Primary’s Halloween community assembly. It was a brilliant morning- all the children and teachers were in fancy dress and after the primary six class “Thriller” dance we had the song in our heads for the rest of the day. Community assemblies are a chance for families to come into the school, find out what the children are doing in school and to recognise the achievements of the children.

After the assembly we were able to speak to the head teacher, Jane Cerexhe about why it started. “The community assembly was really an attempt to engage with families in the wider community. We had a newsletter that was going out monthly but I was quite concerned that not all families were able to access it. We thought if we did a community assembly monthly we could have things in the community assembly that were also features of the newsletter. . . We just feel getting parents in over the door is a good starting point, and welcomed with a smile and seeing their children happy and engaged and seeing the teachers engaged with the children is important. The wonderful thing about today is you can see all the staff be part of it as well it’s not just my idea, it’s what we do here.

We give out a lot of certificates linked to the school values, and this has a very high profile at these community assemblies. Sometimes it is difficult for children who are arriving say in Scotland, new to the Scottish education system to be able to access the curriculum because English is in the early stages of acquisition but we are looking at the whole child. We celebrate all the traditional achievements in literacy and numeracy but we are also looking at wellbeing things how children are getting on with one another. There was a really nice award handed out today for a child who was looking after another child who was new to the school and new to English. Actually a year ago he was that child, struggling with a new culture and new language, so that’s a really lovely opportunity to recognise that.”

i Nov 26th w No Comments x by Marion Fairweather

We just spent an afternoon at St Albert’s Primary school in Glasgow with their bilingual story-telling group. These are parents who are being trained to read stories in English and their mother tongue (Urdu) to children. St Albert’s has a huge ethnic minority population with most children coming from Pakistani and Asian families where both English and Urdu are spoken in the home.

When we met the group several of the parents spoke about their children not valuing Urdu and believing that English was “better”. The school has made a real effort to celebrate the different languages in the school- there are signs in Urdu all over the school and the bilingual story telling lets children hear their native language be used in school. We were able to join a group of children hearing “the very hungry caterpillar” in English and Urdu, the children were enthralled and eager to show that they knew words in Urdu. One of the ladies said that her daughter has started to boast to everyone that she speaks Urdu.

As well as encouraging children to use their mother tongue the bilingual story telling sends an important message to the parents. It shows that the school values and respects their cultures and helping them to feel a real part of the school community. To hear from the parents themselves and to see some of the story telling go to http://gatheredtogether.bemis.org.uk/?p=854