i Nov 18th w No Comments x by Richa

Language always come up in our training when talking about barriers to getting more involved. Not feeling able to talk to teachers or feeling nervous and worried about saying the wrong thing can make any contact with school stressful. In a recent session we did with deaf parents they highlighted that many parents would avoid them as they couldn’t use sign language. Missing out on the playground gossip that parents share can make these parents feel very isolated. We’ve recently heard a lot of stories of children being taken to school without Halloween costumes as parents weren’t aware that their children could dress up- this is really embarrassing for both parents and children and emphasises that they aren’t a part of the school community.

However more schools are starting to use texts to parents to remind them about important things (from in-service days to book fairs), much easier for parents to read than long letters and more likely to reach parents than school letters that can be left in school bags and forgotten. To help parents become more involved in the school it’s useful to have activities that everyone can get involved in. Oakgrove primary school in Glasgow recently needed help putting sand in their new sandpits and sent a text out to all parents asking for help. This was a simple activity that almost any parent could get involved in (Oakgrove is a very diverse school with over thirty languages spoken) and was just asking parents to help for a couple of hours on a Saturday morning. Almost sixty parents along with their families came along to help- creating a real sense of the school community as well as getting the sandpits ready in no time. Could your school use parents in this way?

Capturing the Gathered Together Story

i Nov 13th w No Comments x by Richa

We had an exciting meeting with George Muir, lecturer at the City of Glasgow College’s Television Department- exploring the possibility of getting a film crew of students to try and make a short film about Gathered Together and the work we’ve been doing. While our intern, Maryam Karim, has been doing a great job filming and editing interviews with the people we work for she is working with a pretty basic camera and the college students will have professional equipment to make sure that we have a very professional film.

We want this film to act as an introduction to the project- why we were started, what we’ve managed to achieve and what our hopes for the future are. George advised us the film should only be about seven minutes long and we now have to work out what should go into it- there are just so many great stories that we want to tell!

1+2- a new approach to language learning in Scotland

i Nov 11th w No Comments x by Richa

The Scottish government recognises the value of speaking more than one language; Scotland however is behind many European countries in the area. To help address this and ensure that children in Scottish have the advantages of being able to speak other languages, the “1+2” policy is being rolled out.

“1+2” means that every child will speak their mother tongue and also have the opportunity to learn two additional languages. One of these languages will be taught from primary two until at least third year in secondary school and the other will be taught from primary five. We think that this can provide a great opportunity to teach languages that reflect the makeup of the school- such as Polish, Urdu or British Sign Language. Learning these languages can help children from ethnic minorities feel a part of the school- giving them the opportunity to speak to their Scottish friends in their native language, and creating the chance for their parents to get involved in the school. We already know about schools who have invited parents from ethnic minorities to come in and read stories in their native language or teach a class to count to 10 in Urdu and their children have blossomed in confidence.

From our recent session with deaf parents in Glasgow we know the difference it can make to parents as well for children to be learning their language. When we mentioned that British Sign Language was one of the languages that children could be taught their faces lit up- this could mean that children in the playground would be able to talk to them and give the parents a sense of being part of the school. However asking parents to teach their mother tongue can be a real challenge- standing in front of a class and teaching can be very daunting and we feel that support is needed to help parents develop the capacity to get involved in this way.

From working with language schools we know that many of them would be very interested in making closer links with local schools, including the Glasgow Chinese School. The “1+2” policy brings a lot of potentially great opportunities to get parents from ethnic minorities more involved in their children schools, but we recognise that there will need to be a lot of support in place to help make it a reality  over the next few years.

From bikeability to breakfast clubs- getting parents involved 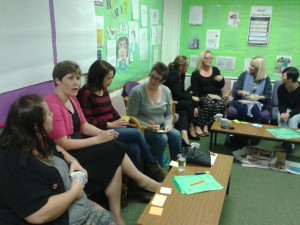 We delivered one of our last sessions in Fife (for the moment- we’re hoping to get more dates for further training soon) at Rimbleton Primary in Glenrothes. At the start we always ask parents what they are already doing to get parents involved and were utterly amazed with how much the schools and parent councils were already doing. As well as the school concerts, coffee mornings and fundraising events there were schools running bike courses for parents and children, craft evenings before Christmas (when families could come in and make Christmas cards together) and pre-school Fair Trade breakfasts for parents and children.

One of my favourite ideas to come out of the session was a survey for parents to find out about what they know about the Parent Council and how they could get involved. This is incredibly helpful for the Parent Council to find out how aware parents are about their work, skills that parents might have and particular people who could use their skills to help the school. The problem with most surveys is that parents don’t answer them- it’s very easy to put off more paperwork from the school or another survey monkey email. But some schools have learnt to use children- the children create the survey in class then ask their parents the questions as homework. This means that about 98% of the parents actually respond.

Please try this at your school and let us know how it goes- good luck! 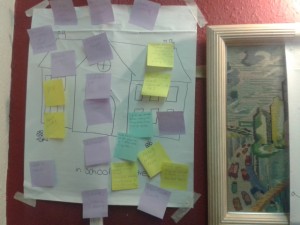 In our sessions with parents from Ethnic Minorities we always ask what activities they are involved in at the school. Often the parents we speak to will only drop their children off at school and attend parents’ evening- they don’t have the time (or the confidence) to do more. We believe that schools need to be creative in thinking of ways that parents can get involved and feel a part of the school community and at our session with mothers at the West and Central Integration Network in Glasgow we were given a host of ideas.

A lot of the parents talked about going into school for end of term Mass, school plays, Christmas fairs and school assemblies. As well as giving parents a chance to see their children’s school, it is always important for children to have their parents come along. At school concerts you will see children looking into the audience to see their parents and that level of support can really help a child’s confidence. Some of the parents have taken a more active role- from making rice dishes for Fair Trade day to helping out on school trips. This helps parents feel part of the school community and children are proud of their parents (at least in primary school!). Our favourite idea was a parents’ netball team! We were very impressed with the parents who do this.

When we were talking about barriers one of the issues that came up a lot was distance- many of the families need to travel quite far to school and this can stop them getting involved in school activities, particularly meetings after school. We also learned that taxis are not able to take a child on their own- this means if one child is off sick then the other child will need to stay at home too as they are not able to get to school by themselves. The parents we met also said that they didn’t feel they could commit to groups like the Parent Council because they wouldn’t always be able to make it- being able to offer flexible ways to get involved could really help these parents.

Sadly racism was also mentioned as a barrier, the mother said that she didn’t feel that the head teacher listened to her concerns and in the end she moved her daughter to another school. We have found the best way of tackling racism is for the school to acknowledge and celebrate the different cultures that the pupils come from- showing all the pupils that difference is to be respected.