The Parental Involvement Survey was conducted in March 2015 to gather opinions and experiences of parents from diverse minority backgrounds in a range of areas relevant in the context of parental involvement. This included issues of engagement (including barriers to involvement), understanding of education system, role of parent councils, schools’ attitudes towards families from minority backgrounds, children’s attainment etc. 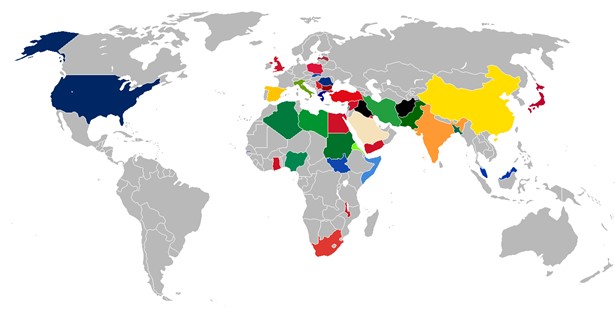 The interviews were conducted in person in English, Urdu, Punjabi, Polish, Arabic, Greek and French by a team of 8 trained interviewers and a total of 164 families were interviewed. As the map above shows this included parents from other EU countries, (former) citizens of commonwealth countries as well as refugees and asylum seekers (specific information about the background of participants are discussed in Section 1.). The survey was anonymous.

Due to practical and financial limitations of the project the sample of participants chosen for the study was a convenience sample rather than a balanced sample with statistically-weighted method of selection. Nonetheless, the study is, as of today, the most comprehensive study on parental involvement of ethnic minority parents in Scotland and gives an insight into the previously overlooked group. Other studies on parental involvement often include only a very small number of ethnic minority parents and are limited in scope so it is very difficult to draw any concrete conclusions from them.

“In Greece we have a principle that the chain has 3 links; school, pupils and parents- if one link breaks the chain is broken. School is very important part of a child’s life- parents must know about it” (Mother, Greece)

Based on the findings of the survey Gathered Together created five briefing papers, summarising key findings, highlighting areas of concern and making recommendations to ensure that parents from ethnic minorities get the right information and support to enable them to best support their children’s learning and be a part of the school community.

Knowledge of the education system